Welcome back to Day 3 of of our Live Below the Line challenge. We thank you again for all of those who have been praying with us at 1:50 each day as we continue to lift the people of Korah in Ethiopia in prayer, interceding on their behalf.  We pray that God will find a way to bring them comfort and love and to let them know that they are more than the trash that they are surrounded by- that they are a precious gift- and that there will be a day with no more suffering, no tears, no disease.

He will wipe away every tear from their eyes, and death shall be no more, neither shall there be mourning, nor crying, nor pain anymore, for the former things have passed away. – Revelations 21:4

Today we will focus on a topic that often leads to the water and hunger insecurities that we discussed earlier in the week, this topic is war and violence. In the year 2000 it was reported that an approximate 1.6 million people died as a result of violence.  Half of these people died from  suicide, one-third from homicide, and one-fifth from global conflicts. Gone are the days of major world-wars between countries; today’s wars are mostly fought within a country’s own borders. Often, rebels in the countries will steal or murder for life saving supplies or prevent their delivery all together, causing malnutrition and dehydration amongst innocent civilians.

Perhaps the practice that disturbs me the most is the use of children in war and violence. There are approximately 250,000 children soldiers around the world, in about 60 countries, with 40% of these being girls. In war torn areas a majority of civilian casualties end up being children, who are either innocently killed or forced into being soldiers. Often children enlisted in rebel forces are required to maim or murder their own family, thus forcing them out of their village and making it impossible for them to return home. War affects children in many ways just like adults, but there are additional hardships endured. Children are dependent upon the adults that love them. In war torn areas these bonds are often severed, leading to high depression rates. War also has many longterm affects on children who may loose a limb and be injured for life. Young girls may be raped and considered outcast in their communities, transmit deadly diseases,  and be considered unable to marry. Of course, the worst outcome for the children is death. It is so senseless that children have to die as a result of war and violence. 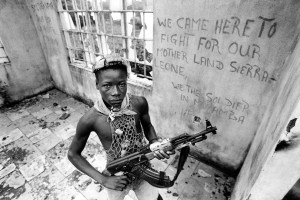 Of the topics that we have looked into this week, war is the most difficult to see an immediate solution. There are tangible solutions to  hunger and water insecurities; however,  war is a much more complex to resolve. This blog is not intended to find a solution to violence and war.  Rather, the goal is to examine its direct compounding impact on hunger and dehydration around the world. There are solutions to mitigate damage and heal children after wars, and I have  listed some links below for you to explore on your own. One solution is education—Schools usually provide a safe, protective environment and a chance for children to socialise with each other. They teach children how to stay safe – both in terms of avoiding landmines/unexploded ordinance but also in terms of avoiding disease, treating drinking water properly etc.

Today began with a growling belly when I woke this morning and feelings of lack of sleep. I took time this morning as I prepared my coffee and oatmeal to spend some time in prayer for the people of Korah and those who are suffering from the pains of hunger and dehydration around the world. As I headed to work I grabbed a banana and began my commute. On my way to work I peeled the banana looking forward to some extra food to get me through the day and was quickly confronted with a bruised banana. This was a challenge for me given that I’m already not a big fan of ripe bananas, but I thought of something I mentioned earlier in the week. When your living on $1.50 you can’t afford to have things go wrong. A simple bruise on my banana and some spilled coffee earlier in the morning were trivial reminders compared to other things people struggle with like illness, natural disaster, war, and much more. I made it through most of the day and battled through some hunger pains as I was a little more active today at work than typical. Perhaps the most challenging aspect that came to the surface for Heidi and I today was the pain that greeted us this morning as we woke up will be most likely felt by our children at some point before they are referred to us. If not hunger, they or their family will likely face the challenges that we are discovering this week. To grieve for the people of Korah, the 1.4 billion people who live on so little is difficult. Having a much more personal connection to our children who will suffer great tragedy before coming into our lives has taken this next level on many aspects.

This challenge was Brian’s idea.  When I agreed to complete the challenge with Brian, I never realized how deeply it would impact me.  Day 3 has rocked me to my core.  I woke up this morning feeling hungry- a gnawing pain in my stomach.  I could not help but think of the millions of children that wake up every.blessed.morning with that feeling- with no end in sight.  My heart literally felt like it was breaking.  This feeling is compounded by the realization that my children will be hungry.  In fact, my children could be very hungry right this very instant.  This is the reality of adoption- children are not placed up for adoption for no reason.  Adoption is beautiful, redeeming, and wonderful; but is it also hard- with hard stories. As a mother, I am overwhelmed with worry, fear, sadness at the thought of my babies being hungry, scared, unprotected for even one second.  Feeling hungry today made my heart grieve for the hunger that my babies will inevitably experience.  I think that it is something that we do not like to think about- we hear about hunger, hear about poverty….but it is always happening to those “other” people.  When we think like that, we can emotionally disconnect from the reality of this world.  I am guilty of this. However, when I think of it as MY CHILDREN, my heart, my everything.  Well, it is just overwhelming.  As I cried out to the Lord in prayer, I heard His gentle reminder that my children and all the people of the world are precious in His sight- HIS children.  He loved my babies before I ever did, and He cares for them.  I am trusting and believing that the Lord is gently holding our babies right in the palm of His hand, that they are able to feel His mighty hand surrounding them- and the love of their mommy from across the world- even in the midst of despair.  Trusting in God’s redeeming love to bless it.  One of our favorite songs is called ” My Own Little World-” such a beautiful prayer in that song:

“Father, break my heart for what breaks yours.  Give me open hands and open doors.  Put your light in my eyes and let me see, that my own little world is not about me.”

Praying for the Lord to continue to reveal His love, His plan, and His glory in our journey.  Bless it, Lord.