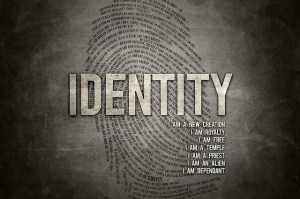 Last month, our church hosted a Youth Conference, entitled “Who Do You Think You Are?”Heidi and I had the privilege of being on the planning committee. The three-day event focused on showing teens their true identity in Christ, compared to what they are consistently bombarded with on a daily basis from the media. It featured two key speakers and over 100 volunteers that helped throughout the weekend. Each night included worship music and small group sessions, with a Saturday evening that included a bonfire, basketball tournament, movie, and lots more. Sunday evening featured a family-night worship experience for parents and children of all ages.

In the planning stages of the youth conference I was looking for unique ideas that could be shared during the Sunday evening family service that would be enjoyed by people of all ages, when I stumbled on a great idea on YouTube called “splat art”. Splat art is a performance art that uses brushes or a performer’s hands to paint a picture on a canvas in a 5-10 minute time frame, usually accompanied by music or narration. I saw this done previously and it was absolutely breathtaking. I thought, what a great idea, this is perfect! After I looked at several examples I found one that really stuck out to me and I suggested to the committee the following week that we include it. When asked, “who we could get to do the performance?”, I said nervously “me”. I had thought to myself prior to the meeting, I think I can do this. I had prayed about it previously and felt a reassurance that I should do this, so I decided that, with enough time to practice, I might just be able to pull this off.

Excitedly I went out to the store the very next day and purchased several small canvases to practice on a a few tubes of paint. The first step in the performance would be to memorize the beginning script of 30 words that are narrated to describe the many beautiful aspects of our Savior. I sat in the parking lot of a UPS store on the day we needed to renew our fingerprints for USCIS and ran through each of the words, sketching them out in order on a sheet of paper as I waited for Heidi to meet me on her way home from work. As we ate dinner that evening I sketched them out on a napkin and got about 80% of them correct. I practiced each day over the next week writing the words as I read the script until I had them memorized. The next part would prove to be the most rewarding, while most challenging part of the process. For the splat art performance, after writing the 30 words in the shape of Jesus face, I would need to use only my hands and 3 colors (orange, yellow, & white) to paint a portrait of Jesus that would measure 4 foot x 6 foot. During the service, I would have approximately 8 to 10 minutes to complete the painting, including the 30 words.

The first evening I painted my test canvases black and grabbed a stick of white chalk to write down the words. As I waited for the black paint to dry, I said a small prayer that God would allow me to be patient in learning this painting—realizing that it wouldn’t be an overnight process. I prayed that He would allow others to see His glory through me and that He would reveal Himself to me over the next 30 days. I poured out some paint on a plastic plate and begin to paint, looking at the screen shot that I had from the YouTube video I previously found. I got a majority of the words correct, but had difficulty in getting the painting portion down. 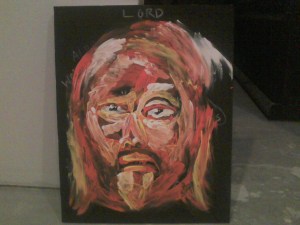 I would go downstairs the following evening to try again. Once again beginning with a prayer and using the time as a true worship experience. I played several praise & worship songs from my iPod and used the time to truly focus on not just painting, but the subject I was trying to glorify. 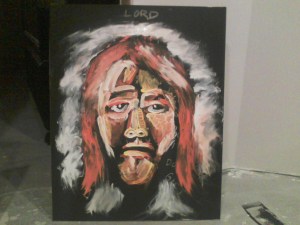 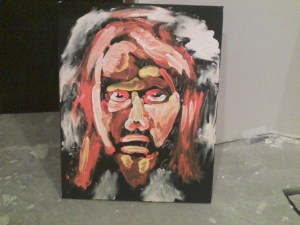 I found that as I kept practicing each day, it was a different experience every time. Each day was led with prayer and was an opportunity for me to spend time during my day just focusing on what Jesus really meant to me. 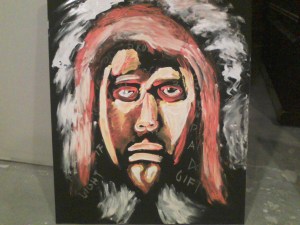 After several days of painting on smaller canvases, I realized that if I was going to learn this properly, I would need to move to a larger full-sized canvas and start working on the timing of narration and the music. I took a trip to Home Depot to pick up a canvas drop-cloth, some Gesso, and some staples and knew just where I could setup a make-shift studio. I spent the evening picking out songs and settled on a song that our youth often sing during the Wednesday night worship service entitled “Inside Out” by Hillsong. I found a live version on YouTube that I thought would be perfect for the performance as it allowed me a little extra time to complete the painting than the original song used in the original splat art performance I had found.

The next morning I went downstairs before work and pulled up on my iPod the original performance I had found on YouTube. I began to write the words in unison with he narration and switched over to the Hillsong video for the painting portion. That morning was the most impactful yet. Although I wasn’t overjoyed with how the painting turned out, I was pleased that I had completed my first full-size painting of Jesus. 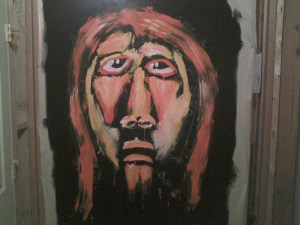 I had now moved on from smaller canvases, so each evening when I came home from work I would need to paint over that mornings painting to make room for a new one. The first time I did this I felt like I was a terrible person. How could I have just painted the face of Jesus? The next morning I woke up early to try again. 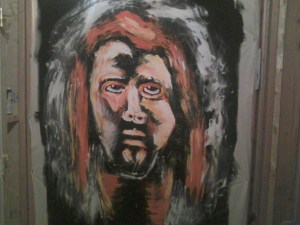 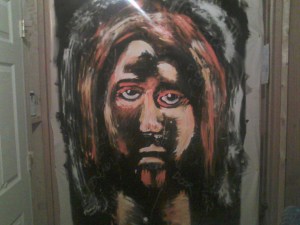 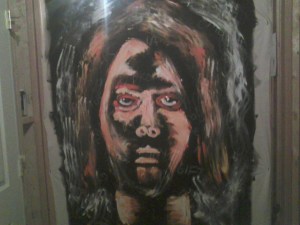 By the fourth day, I was beginning to feel comfortable with the medium, but quickly realizing that it would be impossible for me to match the speed of the narration on the YouTube video. Each morning’s prayer and painting revealed a face of Jesus to me that was just perfect. It was the perfect way to start my day and allowed me to begin my mornings focused on Christ. What a rewarding experience and surreal chance to worship God each morning. 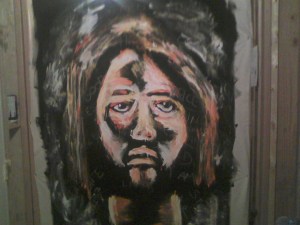 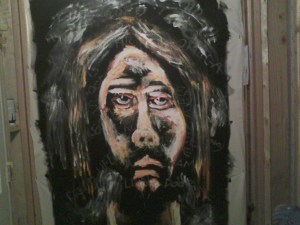 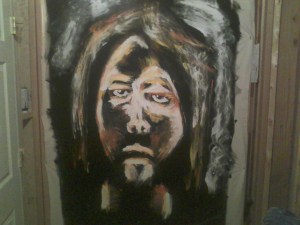 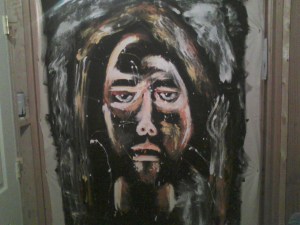 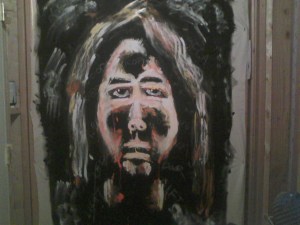 In the days leading up to the conference, I built a custom canvas that was stretched on a frame with a stand that could support it on stage. Focused on getting the narration and song timing down, and spent lots of mornings stepping back from a canvas with chills as the song and entire experience of seeing Jesus’ face come to life, to became a truly moving experience.

The night of the performance I was a complete nervous wreck. I prayed with Heidi before leaving for the church that God would speak through me that evening and that His name would be gloried through it. I hoped that He would use this opportunity to speak to those in the crowd that were seeking Him. To those who have accepted Christ into the hearts previously, I hoped that it would provide them an opportunity—as it did me each morning—to worship Jesus like never before. Its odd to explain, as I know that it’s just a painting and it’s not actually Jesus standing before me, but I felt like I was in his presence many days and I hoped that others would share in that experience.

I sat on the front row, nervous, palms sweating and saying one last prayer that Jesus would guide me through this painting just as he had each day leading up the conference. Amazingly, as the moment drew close I felt a peace come over me and a reassurance that “He’s got this one, just like He had the last one”. The lighting dimmed, the crowd silenced, and I rose to my feet to walk towards the canvas. 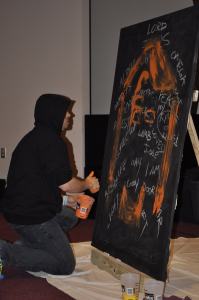 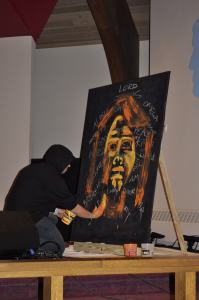 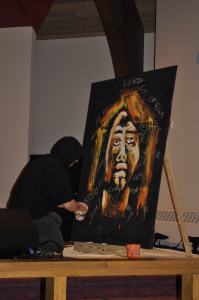 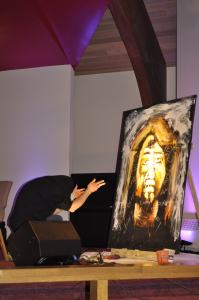 Wow! I walked off stage with the largest smile on my face and a sense of accomplishment. I heard the applause as I stood in a dark hallway behind stage and said a quick prayer to thank God for leading me through the performance. I had managed to make it all the way through without messing any of the words up in the narration and smearing any paint where it shouldn’t be.

Click below to see the video from that evening

Who Do You Think You Are? Splat Art Performance

I learned in the 30 days leading up to the performance to trust in God and be patient with His plan. Something He has been working on teaching me for the last several years through our journey. I have received such positive feedback from those who viewed the performance that evening and look forward to finding other ways to offer creative worship to our church for special services. I also found a strengthened relationship with Him through my morning worship time and a renewed passion to take time to each day to focus on worshiping the God who has blessed me beyond belief in my life.

Thanks goes out to those on the committee who trusted and encouraged me through the process of learning this painting, to my wife who helped encourage me each day and provide me creative advice, to those who helped make this possible through transporting my canvas, video projecting  my performance, and providing amazing voice over narration. What an awesome experience to take part in and I pray for those who may have been encouraged to try new things, and to trust in the Lord.