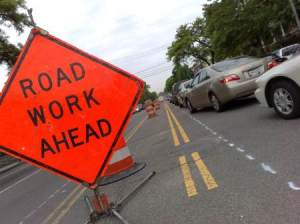 Each morning I hop in my car and drive to work from Pennsylvania to New Jersey along the I-78 corridor. For those that travel this same route, you know that recently there has been a construction setup that knocks 3 lanes down to 2 lanes, causing traffic jams in the evening while they are working. During the morning commute several workers are present, but the great majority are gone with all 3 lanes open and clear for driving. At the beginning entrance to the construction area flashes a giant lit sign that reads, “55 MPH, Slow Down”, “57 MPH Slow Down”, “56 MPH Slow Down”. Its purpose is to alert drivers that they are exceeding the 45 MPH speed limit of the construction zone.

Each morning, along with 1,000′s of other motorists, I breeze by the sign at an easy 65+ MPH, blending in with traffic and breaking the law. Why do I not slow down?! The sign is giving me a heads up that dangerous road conditions are ahead, that people are working in the area, traffic patterns may be changing. I suppose I do not slow down because most mornings I’m blended in with the crowd of cars surrounding me. Some mornings, I’m running behind schedule and slowing down would be too inconvenient for me—I’ve got places to be. While other mornings, I think it might be dangerous for me to drive 45 mph, because everyone else is going 90! I risk getting hit myself or sticking out from the crowd, being “that guy”.

Friday morning during my commute, I got a little help in slowing down while proceeding through the road work area. Shortly after breezing by that sign, there he was. A state trooper with his lights on, nestled in between several of the road cones where there were workers on the side of the road jack hammering up part of the macadam. This is the exact thought that went through my head, and inspired this post. “Mannnnn, why you got to make it so difficult for us. We all knows it’s a construction zone, there’s a large flashing sign to tell us. You can’t expect me to actually go 55 MPH, right?“. Well luckily for me, even though I was doing 62 at the time, there were people on either side of me going much faster and the officer didn’t even budge. After I pumped my breaks and proceeded to slow down until the end of the construction zone, I took the next few minutes of my commute to think about this.

I wonder if sometimes we treat God like a State Trooper in a construction zone? The officer in that car is there for a purpose. He’s there to keep others safe and to make sure that the law is fulfilled. When becoming a state trooper, he is sworn under the creed to protect and to serve. Here I am, driving 65 mph, thinking he’s cramping my style. I think about the laws that God provides, and sometimes they aren’t easy to keep either.

If we keep God’s commandments, while others around us are breaking them, it’s human to be concerned that others will think you’re “that guy”. The Word says to not worry about the world’s opinion: “If you were of the world, the world would love ⌊you as⌋ its own. However, because you are not of the world, but I have chosen you out of it, the world hates you. ” James 15:19.

It is also human to think that if you follow God’s laws that you’ll be missing out on something, but Jesus says otherwise, “15 Do not love the world or the things that belong to the world. If anyone loves the world, love for the Father is not in him. 16 For everything that belongs to the world — the lust of the flesh, the lust of the eyes, and the pride in one’s lifestyle — is not from the Father, but is from the world. 17 And the world with its lust is passing away, but the one who does God’s will remains forever.” 1 John 2:15-17. 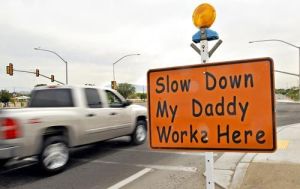 I consider the laws that God provides and his commandments to be just like that flashing construction sign. It is there to provide direction to safety for motorist and to keep the workers and other drivers in the area protected. God’s laws shouldn’t be viewed as limiting us from life, but instead providing us the true meaning of life. Just like that sign, God’s Word provides a specific look at who we are and what were doing in our life. It provides guidance to get us through life safe to our final destination. “Your word is a lamp for my feet and a light on my path.” Psalm 119:105. Keeping His Word will not always be the popular thing to do. It will sometimes appear that you should go your own speed and ignore the flashing sign, but one day during your normal routine, you may see Him—Heaven’s State Trooper—He was there all along, trying to keep you safe, trying to protect you. You knew you should be keeping His laws, but you choose to go your own speed. Only this time He may not simply let you pass Him by, that day He may be handing out tickets. “I tell you, on the day of judgment people will give account for every careless word they speak” Matthew 12:36. I hope that I can keep this in mind the next time I pass that sign and the next time that I feel torn between what the world says, and what God says. That He’s not there to cramp my style; it’s out of love that he’s there to protect.