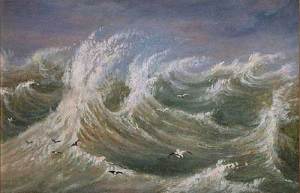 On August 3, 1492, three ships set sail from Port Palos in Spain called the Nina, Pinta, and the Santa Maria, on a journey to find a western sea route to China, India, and the fabled gold and spice islands of Asia. As any good sailor would have done, I’m sure that the captain, Christopher Columbus, planned carefully for his voyage. He would have consulted his fellow sailors, studied the trade winds and latest hand drawn maps, and he would have, no doubt, made sure that he had enough provisions to sustain the trip. More than likely, there were stories of others who had tried such an expedition and fallen off the edge of the Earth or been gobbled up by a sea monster, but Columbus sailed his ships out of the harbor bravely and into the unknown with a passion to find his treasure.

On Tuesday September 11, we will officially cross the mark of 22-months on the official waiting list for our adoption. I think of the time period leading up to us placing the first packet of forms in the mail and the preparation, discussions, and praying that took place. The planning for a journey into the unknown, with a destination in mind, but no real maps or navigational points on how to get there. We talked with family, friends, and other adoptive parents who provided us with advice, strengthened us in faith, and committed themselves to joining us on our journey to adopt. In faith, Heidi and I placed our boat into the water on July 6, 2010, pointed toward the children that God has planned for our family, and began paddling out of the safety of our harbor.

Recently, we both heard a sermon from the book of Mark 4:35–41 which describes a time when Jesus finished preaching to the crowds for the day and asked his disciples to sail him to the other side of the sea. Tired from the heat of the day, Jesus rested on some cloths at the front of the boat as the disciples lead the boat of the harbor and into the sea.

Somewhere near the middle of the journey, the weather changed and the sea began to get very rough with large swells and strong winds. As the boat was tossed around in the waves, a number of the disciples became nervous and cried out to Jesus, “Wake up!” they inquired, “Don’t you care if we drown?” When I think of this visual I imagine the look on their faces and the feelings of sheer panic in their hearts. These guys were fisherman, so they must have known a bad storm when they saw one. What a strange juxtaposition to the sleeping Savior, who is not shaken by any storm and sleeps calmly at the bow of the ship.

I think of the journey that Heidi and I have taken and the numerous times that our boat began to get tossed in the wind and the waves. In April of 2011, the Ethiopian courts began to slow significantly; the process slowed to a crawl, and the initial plans of an 8-9 month journey began to look more like 24–36 months. We cried out to Jesus, “Wake Up!” followed by, “Don’t you want us to have children?” We had been able to move pass the infertility stage of our journey; we were sailing smoothly towards our destination; and suddenly the skies turned grey and our navigation was knocked off course.

Going back to the disciples on the stormy sea, their panic and shouts eventually woke Jesus from his rest, and he proceeded to stand up at the front of the boat. Jesus stretched out his arms over the wind and the waves and calmed them at once. He inquired to the disciples around him, “Why are you so afraid? Have you no faith?” 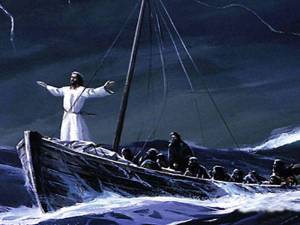 When faced with stormy times in one’s life, it is easy to begin to panic and cry out. It is difficult to step back and relinquish control. I find it is human nature to keep paddling furiously in the direction you see best fit until you become tired and lost, and can paddle no more. I couldn’t tell you the time or date, but I know there was a time when I just handed over the wheel to Jesus. (Oh, boy I just sounded like Carrie Underwood). Trying to navigate the seas became more than I could control and I began to grow tired and feel lost. In the past several months I have felt the seas calm and the wind die down and our ship has continued its course. It is with continued faith that we trust that we are on the correct path, that our final destination is just across the sea, and that our Captain will guide us there in perfect timing and will deliver us safely through any storms or winds that arise.

Christopher Columbus is a perfect example of when things don’t always go as planned, but the final destination is better than you could ever imagined. On October 12, 1492 as Columbus continued his voyage, land was spotted from the mast of the ship and it appeared that he was nearing the end of his journey. He would soon find out that his navigation had been slightly off course. He  discovered what is known today as the Caribbean Islands, and would later go on to sail along Cuba, Dominican Republic, Haiti, and eventually North America. In March of 1493, Columbus would receive the highest honors of the Spanish courts, noted as the first European to explore the Americas since the Vikings. If interviewed, I’m certain that Columbus would have talked about the faithful journey that he set off for in August and the amazing discoveries that he found in October were all worth the stormy seas that he had to sail through to get there.

Driving home from work on Friday evening, I heard a song that I have heard a 100 times, but found new meaning in this particular evening. It is written by country singer, Garth Brooks, and is entitled The River. It was the inspiration for this blog post.

It is important to keep in mind that even the rough seas are navigated by God. Were not stuck in no-where land, tossed about like a lost ship, but sailing calmly through stormy seas with a plan and a purpose to reach our destination. The song finishes with the last verse:

There is bound to be rough waters,
and I know I’ll take some falls,
with the good lord as my captin,
I can make it through them all!

In 22 months of waiting, although we are tired and weary from the months at sea, we keep faith in our journey with God as our Captain. We will make it to the day when we see our little blessing(s) face(s). In our arms, held tight, our journey will all make sense. The purpose will be revealed.

If you are currently feeling lost or swept away by the storms, I invite you to allow Jesus to calm those storms in your life. Hand over control and you’ll be amazed at the calmness and sense of control that will come back into your life.